The flag of Abkhazia consists of seven horizontal stripes alternating green (top and bottom) and white, with a red canton with an arch of seven stars above a red, open hand.

Pro-Georgian government in exile of the Autonomous Republic of Abkhazia uses the flag of Georgia.

The design of the red canton is based on the banner of the mediaeval Abkhazian Kingdom.

Official interpretation of the colours is as follows: the green represents life, and the white represents bright future.[4]

The flag is based on the one of the North Caucasian Federation.

Other flags of Abkhazia and Abkhazians[] 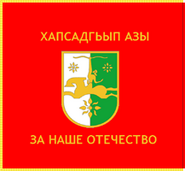 Flag of the armed forces

Flag of the Navy fleet

Flag of the Abkhaz diaspora in Turkey

In 1951, when Georgian SSR adopted a new flag, its flag became flown in Abkhazia without any modifications.

In 1978 the republic adopted a flag: the flag of Soviet Georgia with golden lettering "АҦСНЫ АССР" (AP’SNI ASSR, "Abkhaz Autonomous Soviet Socialist Republic") or "АҦ.АССР" (AP’.ASSR) below the blue square.

In 1989 the congress of Abkhaz people adopted a flag without Georgian symbolism, and decided to drop the word "autonomous" from the official name of the republic. It was not recognised by the authorities of Georgia.

On August 25, 1990 the Supreme Council of the republic passed the Declaration of Sovereignty, thus proclaiming its independence from Georgia, which was not recognised by Georgia itself.

The current flag designed by Valeriy Gamgia won a flag contest in 1991 and was adopted by the Supreme Council of the Republic on July 23, 1993.[5]

Variant of the previous flag