The national flag of Moldova is a vertical tricolor of blue, yellow, and red, with the coat of arms of Moldova on the yellow bar on the obverse side only. The colours of the flag are almost identical to that of Romania, showing the two countries shared history. The difference between the two is the coat of arms on the Moldova flag. While Romania and Moldova were the same country they adopted the flag with the red-yellow-blue stripes in 1848.[1]

The three colours represent three provinces of Romania,[1]the olive branch represents peace and the blue and red on the eagle's chest has traditional symbols of Moldova, 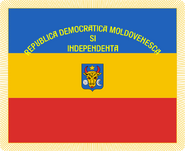 This article is a stub since the designers of the Moldova flag aren't named here. You can help VexiWiki by adding them.