Edit
watch 01:40
The Sandman Will Keep You Awake - The Loop
Do you like this video?
Play Sound

The national flag of Nepal (Nepali: नेपालको झण्डा) is a very unique flag, because it's the world's only non-quadrilateral flag that acts as both the state flag and civil flag of a sovereign country. The flag is a simplified combination of two single pennons (or pennants), known as a double-pennon. Its crimson red is the symbol of bravery and it also represents the color of the rhododendron, Nepal's national flower, while the blue border is the color of peace. Until 1962, the flag's emblems, both the sun and the crescent moon, had human faces, but they were removed to modernize the flag. The current flag was adopted on 16 December 1962, along with the formation of a new constitutional government. It borrows from the original, traditional design, used throughout the 19th and 20th centuries, and is a combination of the two individual pennons used by rival branches of the ruling dynasty.

After Prithvi Narayan Shah unified all small principalities of Nepal, the double-pennon flag was adopted. In modern times, the flag's symbolism has evolved to incorporate several meanings. The crimson red indicates the bravery of Nepali people and is the country's national color and the blue border represents peace and harmony. The colors are often found in Nepalese decoration and works of art. A theory is that the two points represented peace and hard work, using the symbols of the moon and sun respectively. Traditionally the flag of Nepal is derived from Hinduism which is common in Hindu cultures. However, the modern and government-sanctioned representation is of Hinduism and Buddhism, the main religions of the country.

The inclusion of the celestial bodies indicates Nepal's permanence and the hope that Nepal will enjoy the same longevity as the Sun and the Moon. The moon also symbolizes the cool weather of the Himalayas, whereas the sun symbolizes the heat and the high temperature of the southern lowlands (Terai). Additionally, the stylized moon represents the calm demeanor and purity of spirit of the Nepali people, while the stylized sun represents their fierce resolve.

During ancient times, the flags of almost all states in South Asia were triangular. Nepal has simply maintained its ancient tradition, while every other state has adopted a rectangular or square version in the European vexillological tradition.

The flag of Nepal is the only national flag which is not rectangular, being based upon two separate pennants which belonged to rival branches of the Rana dynasty, which formerly ruled the country. The two pennants were first joined in the last century, but it was not adopted as the official flag until 1962, when a constitutional form of government was established.

The moon in the upper part represents the royal house. The sun in the lower part symbolizes a branch of the Rana family, members of which acted as prime ministers until 1961.

The charges are now said to represent the hope that Nepal itself will last as long as the sun and the moon. The style of these heavenly bodies was streamlined on December 16, 1962. The coat of arms still portrays these charges with facial features. Crimson is deemed the national color.

Motto on their coat of arms: "The mother and the Mother Earth are more important than the heavenly kingdom." 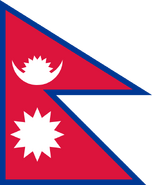 The national flag of Nepal is a simplified combination of two single pennants that represent, for some, the mountains of Nepal while for others the Hindu flags. The flag was adopted, with the formation of a new constitutional government, on December 16, 1962. The individual pennants had been used for the last two centuries and the double pennant since the 19th century.

Why isn't it rectangle/square shaped?[]

The pretty uniform shape of the national flag can be probably explained by the fact that the national flag has its origin in a limited area (Europe and Mediterranean), as ship flags. Certainly there had been different shapes in the early times, but rectangular clothes of an approximate proportion of between 1.5:1 and 2:1 seemed the most practical ones, so the countries "standardized" this shape. Afterwards the ship flags had been adapted for terrestrial use. National flags of countries outside Europe only developed after European national flags had standardized their shape, so they were imitating the rectangular shape as well as some of the symbolic elements (vertical/horizontal stripes, for instance). Older national symbols were transformed to the "European" flag shape, for instance in Ethiopia, where the originally separated red, yellow and green pennants were transformed into a horizontal triband of rectangular shape. Nepal retained the original shape of its flag (basically two pennants one above the other). The first origin of this flag is probably elusive. However, other flags in the Indian area also showed non-rectangular, often pennant-like shape, see in-princ.html#alpha. The Nepali flag is probably the only one surviving, something like a "living fossil". Usually living fossils survive in rather secluded areas, such as Nepal (not having coastal access, and being mountainous) or Switzerland (the same), still sticking to the square shape of its flags.

When constructed according to the stated geometric construction law, the ratio of the height of the flag to the longest width is an irrational number:

This ratio is the least root of the quartic polynomial and arises from the addition of the blue border after construction of the red field. The bounding rectangle of the red field alone has the rational aspect ratio 3:4 (=1:1.333...).

Because of the Nepalese flag's unique proportions, its large-scale reproduction is difficult. It is sometimes overlaid on a white area to make the flag a 3:2 ratio; an example is the Nepalese flag used at some venues of the 2016 Summer Olympics where the flag design was placed on rectangular cloth the same shape as other flags at the Olympics, with the rest of the flag left white.

During a 2018 visit of the Indian Prime Minister Narendra Modi to Janakpur, a version of the flag with incorrect shape and geometrical proportions was flown by officials, causing outrage on social media and with national personnel.