The national or civil flag (la bandera nacional) of Peru consists of three vertical bands of red, white, and red.

June 7, the anniversary of the Battle of Arica (1880), is celebrated as Flag Day.

Ultimately the flag is based on the flag of Argentina, the first Spanish colony to gain independence, with blue stripes replaced with red ones to make the flag distinct.

The colours probably are inspired on parihuanas, red-and-white flamingos; or taken from the flag of Chile.

The state flag (el pabellón nacional) of Peru is the national flag charged with the national coat of arms. It is used by state institutions, during special occasions and as the national standard (estandarte nacional) indoors.

The war flag (la bandera de guerra) of Beru is the national flag charged with a modified version of the national coat of arms. It is used by the Peruvian military and national police.

The naval jack (la bandera de proa) is a square flag, consisting of a white square with the coat of arms on a red field. It is flown over battleships. 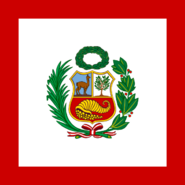 The first flag of Peru was created by General José de San Martín and adopted by a decree on October 21, 1820. Fabrication of this flag turned out too difficult.

On May 31, 1822, Torre Tagle changed the flag again, making it a vertical triband.

On 25 February 1825, during Simón Bolívar's administration, the Constituent Congress changed the design of the flag through a law of national symbols. The sun was changed for the new coat of arms, designed by José Gregorio Paredes and Francisco Javier Cortés.

From 1836 to 1839, Peru was temporarily dissolved into the Republics of South Peru and North Peru, which joined Bolivia to form the Peru-Bolivian Confederation.

In 1950, General Odría modified the national flag to its current form, removing the coat of arms from the civil flag, since it was already used de facto, being easier to make. The state flag and war flag were created for exclusive uses, each with a variant of the coat of arms, which was also changed slightly.