Edit
watch 01:40
The Sandman Will Keep You Awake - The Loop
Do you like this video?
Play Sound

The flag of Russia (Россия) is an equal horizontal tricolour of white, blue, and red.

Originally the flag was made to be flown over one of the first Russian ships and was designed after the flag of the Netherlands. It uses the traditional Russian colors white, blue, and red (also featured on the coat of arms of Moscow).

The flag uses Pan-Slavic colors, probably because it influenced their choice (between 1795 and 1878 Russia was the only predominately Slavic independent country in the world).

Officially the colors have no symbolism. But throughout its history many explanations were proposed: 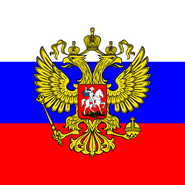