The Flag of Tibet, commonly referred to as the Snow Lion Flag or the Free Tibet Flag, was adopted in 1912[1]

The 14th Dalai Lama, during the rebellion of Tibet against communist China, they used the another flag because they did not know what the meaning was of the the Snow Lion Flag.

The flag was adopted in 1912. The 13th Dalai Lama adopted it as his country's flag in that year. The Dalai Lama and others were helped by a Japanese priest while designing it. The flag originally started as the flag of the Tibetan army after the fall of the Qing Dynasty 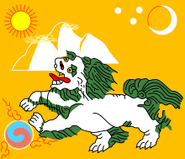 A standard used by emperor Songtsen Gampo in the 7th Century C.E.

The Tibetan military waves the Snow Lion at a 1938 march in Lhasa.